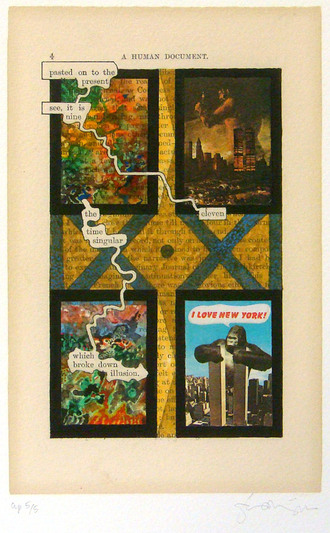 A year ago, almost to the day, I got an email out of the blue from Lucy Shortis, who runs the office of my favourite artist, Tom Phillips. She said some nice things about a very old blog post of mine, and asked if I would consider writing a “short biography of Tom” for a new website for him. I drummed my fingers on my desk for half an hour before replying, thinking it might seem creepily over-keen to accept the challenge within five minutes. Still, I was round at the studio to discuss the work with Lucy the next morning, a Saturday.

I already had several books of Tom Phillips’ work, none of which I’d given as much attention as I would have wished. (I used to think of these enormously rich works as resources to keep me alert in my retirement. Via this commission, I enjoyed the luxury of bringing forward a few weeks of that retirement.) One of the first things I did was track down and buy some more of his books. To a dabbling hobbyist like me, Aspects of Art was particularly useful in providing a concise, straightforward account of both Tom’s perspective and the grammar of art history that he draws on.

It took me weeks of research before I felt ready to start writing, and, thus when I did I was so marinated in the rich play of ideas in Tom’s work, that I couldn’t quite bring myself to write a ‘straight’ biography. My first attempt was well over the word limit and so wide of the mark that I had to put it to one side. No matter. Try again. With a little guidance from Lucy, I came up with this attempt which went live with the new website a couple of weeks ago. Moreover, Lucy was kind enough to indulge me by finding a home for my original essay.
The new website is one of a series of happenings this month that mark Tom Phillips’ 75th birthday. (There’s a neat symmetry about this number for me, since I first encountered Tom’s work at his 1987 exhibition in Sheffield, “50 Years of Tom Phillips, 100 Years of the Mappin Art Gallery”.) Other birthday events include two exhibitions in London and the publication of the fifth edition of Tom’s book A Humument, which he’s been working on for 46 years and counting.

Regarding the last of these, I pitched to The Spectator to write an article about A Humument and you can read it in the current edition of the magazine or online. Once again, my first draft of this went way over the word limit and included playful embellishments that had to be cut for publication. Now I’ve gone back to that draft to create a “Director’s Cut” version. Like most Director’s Cuts, it’s by no means better than the version where I had my wings clipped: it rambles along down several diversions; it has pretentious flourishes; its editing is baggy. If you want a decent overview of A Humument, read the Spectator piece. If you’re part of the niche audience that’s interested in a few of the many different directions in which A Humument leads, this is for you.

The artist Tom Phillips will be 75 on 24th May. Alongside two new exhibitions and the launch of a new website to mark this milestone, he is publishing the Fifth Edition1 of his “treated Victorian novel”, A Humument. When he began work on it, over 45 years ago, Phillips was himself unsure about this unusual work, which inhabits a limbo between coffee table art book and Finnegans Wake. Apparently he initially only worked on it in the evenings, having “resolved not to squander precious daylight hours of work time on what he suspected may be a wild all consuming folly.” It could have been a dated Sixties curio, but it has endured, and somehow seems to have anticipated successive generations of thought about image, text and meaning, right up to the iPad era.
Revision is the essence of A Humument, or, as the book itself says, “the changes are the method.” From the beginning the text was reworked by being drawn over, cut up, highlighted and re-sequenced, repurposed and generally subjected to every adulteration you could imagine. Each edition since 1980 has between 40 and 100 pages revised from the previous one.

Some backstory may be useful to explain what is going on here. Legend has it that, in 1966 and under the influence of ideas about chance operations, Phillips committed to take as the foundation for his next work the first book that he could find for threepence. That book, discovered second-hand in a shop on Peckham Rye, was a long-forgotten Victorian romance novel in journal form, A Human Document by W.H. Mallock. Phillips set about effacing the pages of this book with sketched line drawings and gouache swathes of colour.
Alongside cut-ups and fold ups, one of the trademarks of a A Humument is the “rivers in the type”, as Phillips calls them, the thin lines of white page left untouched by his drawing, which join disparate phrases, words or part-words from across the original text into new phrases and blank verse. From these rivers emerge Phillips’ own poetry2 along with, for example, lines from Samuel Beckett that Phillips has found “lying latent” in Mallock’s novel.

In the mid-sixties William Burroughs was advancing the idea that the quasi-random manipulation of texts could tap into subconscious cognition, putting you in touch with what you know but do no know that you know, and thus predict the future. To the extent that Phillips‘ makes any claims to divining the future, he does so with a mischievous wink, but he has spoken of taking A Humument to Burroughs (then resident in London) to seek his opinion. During an eight hour visit without food, drink or even a seat, Burroughs made several suggestions that hadn’t occurred to Phillips3. Whether any of these made it into later versions is unclear.

Via John Cage, another advocate of chance, Phillips was introduced to the I Ching and the idea of a text that could be consulted at random. Mallock’s A Human Document became Phillips’ I Ching. “Its vocabulary is rich and lush and its range of reference and allusion large. I have so far [1980] extracted from it over one thousand texts, and have yet to find a situation, statement or thought which its words cannot be adapted to cover.” As well as A Humument, it has formed the basis of Phillips’ opera (Irma, first performed in 1973), found its way into several of the illustrations he made for his translation of Dante’s Inferno (1983).

When postmodernism became the talk of the Reviews sections, with its motifs of intertextuality, deconstructing narratives and the erasure of the author, it was as though A Humument was already there, ready-made, saying “welcome aboard”. Phillips had been familiar with the ideas of people like Roland Barthes, Jacques Derrida and Umberto Eco from the beginning of his work on the book, but he has always seemed to approach his adventures in this field with a twinkle in his eye rather than arch of his brow. He wanted, he wrote, to “do” structuralism, rather than to talk about it.

“The reader changes the book / That book changes the reader” read the rivers of type on the back of the new edition, while the flyleaf says the book is considered the “defining masterpiece of postmodernism”, in a quote attributed to Bill Hurrell. The reader is invited to do a little work to appreciate the wit of Hurrell’s claim.

And over the last decade and a half A Humument has taken on parallel lives, first on the web and then with its own iPad app (including a chance-driven “oracle” feature — referring back to the I Ching again — that digitally combines two pages, “your fate and fortune to divine”). The publisher and designer James Bridle, who has articulated some of the freshest ideas about where books might be going in the era of digital ink, says of Phillips’ Humument project, “I’ve always used it as an example of something which has always been perceived as intrinsically physical, inseparable from that form, but where in fact the author, from the very beginning, has always wanted to do something more with it, which has only been possible with the advent of the digital edition.”4

Lest it should seem that A Humument be a literary Zelig — blending into powerful ideas of the time while remaining enigmatically nondescript — be in no doubt that it has a strong sense of longstanding traditions of bookcraft. And it’s not afraid to mess with them. Notionally it is the story of frustrated love for Irma (who is native to Mallock’s original text) felt by Bill Toge (a protagonist of Phillips’ invention). In both this narrative, and some visual motifs of obelisks and arches, it parallels the Hypnerotomachia Poliphili, an elaborately decorated and illustrated work, first published in 1499. I confess I’ve never been able to follow the story. This may be partly down to the fact that A Humument is also haunted by the ghost of Tristam Shandy. Furthermore, recent revisions feature a smaller profile for Toge5, since his appearances are restricted to those pages where the words “together” or “altogether” feature in Mallock’s original text, and these pages have now been exhausted.

Throughout the many incarnations of A Humument in physical and digital forms, and its derivatives in opera, song and painting, what it lacks in narrative coherence is more than compensated for by Phillips’ deft and uncanny ability at meaning making. He has developed an intuitive knack for adding layers, links and echoes of other works (his own and others). “So the changes made the book continue,” runs the text. How much of what passes for originality is in fact a continuous layering and revision of what has gone before? I asked a friend if he could express this in proper metre: A Humument exhumes text long-forgot; tells how the compost of antiquity, lies under all originality.