This post is my contribution to an ongoing project organised by purpos/ed, “a non-partisan, location-independent organization aiming to kickstart a debate around the question: What’s the purpose of education?” This was initiated by Doug Belshaw and Andy Stewart.

When I signed up to make the 38th contribution at the fag end of an already-extended process, I knew that it would be almost impossible to say anything original (well done, Simon, for trying), so I planned to focus on framing and connecting what had already been said. The process of doing that led me in a challenging direction.

This week, I read all the contributions that preceded this one. Two dimensions emerged fairly early on in this reading, shown in my figure below. Admittedly this is crude; not everything fits, and some occupy more than one place within it. But the differences are worth drawing out. 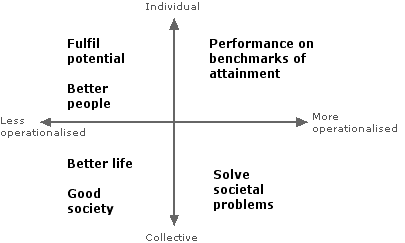 Probably the most common phrase in this debate is some variation on “fulfilling individual potential” (e.g. Jan, Lou, Mark, Zoe). I guess this reflects a focus on increasing people’s self-determination, and who can argue with the desirability of that? Yet it misses the idea that individuals should strive to be part of something bigger than themselves.

That was introduced in Keri’s initial reference to the good society, touched on by Mark’s exhortation to root out injustice, and elaborated by James’ call for “a system of education that can begin to undo the harm that we have done to the world” (also referencing Fred).

On the other dimension, we’ve seen education described as the means to help people perform roles better, be happier and better people, create a better life. Again, it’s hard to disagree with making things better — but how useful is this description of purpose? We need to go to the next level to explain how education can help.

The opposite pole on this dimension would be to specify target measures whose achievement would be a proxy for the societal returns from education. Unsurprisingly, given the prevailing reaction to targets-and-assessment culture in educational circles, no purpos/ed piece has leant strongly towards this end of the spectrum. Yet surely we need to articulate some of the intermediate steps of how education makes things better, rather than just claiming that it does?

Another recurring theme is about developing the appetite and the skills to keep learning. As Tom and Lisa have pointed out, we’re born with appetite; in practice it seems that education sometimes does more to diminish than to sustain that desire.

The West may soon need the resilience and adaptability that comes from keeping learning “muscles” in shape. We, the generation writing purpos/ed, are fortunate to have lived our lives in peace and relative affluence. We’ve had the luxury of framing our goals in terms of personal fulfilment. We have never been tested by times of mass crisis.

This is not the case for other societies and other times. Every year 20 million people die before their time because of poverty: their potential is unfulfilled. That’s about a third of all deaths, and education is making slow progress in bringing that number down.

The sad truth is our children are unlikely to be as lucky as we have been, and may face urgent, chronic problems. They may find fulfilment by solving those problems, but their prime concerns could be lower down Maslow’s infamous hierarchy.

Before the first Purpos/ed post was written, I jotted down my own off-the-cuff answer: “the purpose of education is to aid our meditation on purposes — what should we do, why and how?”. I know that’s a bit glib, but it adds a reflexive twist to this debate: how sophisticated and sensitive to changing context are our education systems and discourse? I worry we may be in for a rude awakening when the education squabbles of the Easy Times are shown up as an irrelevant sideshow when the Hard Times bite.

My hunch is that we’re going to have to shift the centre of gravity of education from the top left of the figure above to the bottom right.

It’s a tough job, and a canny art, to orchestrate an online debate that is spread out over time and multiple blog locations. Kudos to Doug and Andy for taking it on. I have to say, I’m not sure that the approach in setting the question has drawn out the best in the participants. Taking it head-on by asking us all to answer “What is the purpose of education?” risks two problems: one is that we all trip up over each others’ toes, trying to say in similar things in different ways; or the converse, that we talk past each other — unable to reconcile our diverse perspectives and experiences in the space of 500 words, we just ignore them and stick to what makes sense from our own position.

If doing something like this again, I’d look closely at the many other online “brain-pooling” exercises that there out on the web. John Brockman’s edge.org, for example, frames questions in ways that draw out the unique specialisms of the respondents while also building a rich, diverse picture when you put them all together. See, for example, How is the Internet changing the way you think? or What will change everything?. Maybe something like “What single change to our educational institutions would make them better?” (or, reflexively, “What do you think is the most important question facing education now?”!)

On the positive side, though, my advance anxiety about what I was going to find to say in this post fuelled another post — questioning the more/better brains approach to solving our problems — which is over on the New Public Thinking blog.

6 thoughts on “Purpos/ed: What’s the purpose of education”