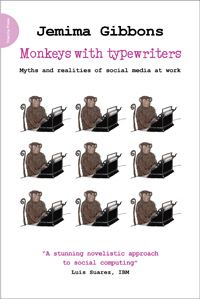 , I was vaguely aware of a tut-tutting from my inner voice, an occasional rolling of my inner eye. “Sheesh, this social media stuff wants to be seen as shiny, new and transformative,” they seemed to be saying, “but really it’s just another episode in the gradual chipping away at the old Fordist, Taylorist, command-and-control model of the enterprise.”
Then I reached page 64, where one of Jemima Gibbons’ interviewees argues that, in social media, technology has caught up with ideas that have been around for a generation. Aha! My inner head (?) nods in approval. Who is this shrewd commentator that Jemima has consulted? It’s me. Yep, that’s me all over: conjuring thoughts that seem original to me, only to find that I’ve been singing the same old song for years (Jemima interviewed me in 2008).
So that’s the disclosure out of the way, and, for helping out as an interviewee, I got a free copy of the book. Jemima and I have moved in similar circles in London since around 2003, when we were both part of Ecademy’s now-defunct Media Playground group and when Jemima led Cass Creatives at City Business School. She lists an impressive total of 48 interviews as part of the research for Monkeys with Typewriters, and round about a quarter of them are from what could be loosely called the London social media scene. But (forgive the pun) Jemima also casts her net wide enough to take in key web entrepreneurs from the US (Ross Mayfield, Craig Newmark, Jason Fried, Tim O’Reilly), academics and writers (James Boyle, David Weinberger) and some corporate managers (BT’s J.P. Rangaswami, IBM’s Gina Poole and Luis Suarez, BBC’s Richard Sambrook). There’s even one old management visionary from a previous generation, in the shape of Shell’s Arie de Geus.
What emerges from this journalistic approach is a very people-centred approach to the topic of leadership and management. You could even say that — in the style of a social network — the story of the book is based around profiles. Certainly Monkeys with Typewriters is very much concerned with the character of leaders in the Web 2.0 world, as its chapter headings — Passion, Openness, Listening, Generosity — suggest. In this way, Jemima really succeeds in giving a humane sense of what’s involved in dealing with this new world: she’s concerned as much with feelings as with ideas.
But what is the message that common or garden managers will take away from Monkeys with Typewriters? This is where, at the risk of flogging the same point I started with, the song remains pretty much the same. To be a good leader, the story goes, you have to give up control, abandon management by metrics, and learn to trust the people you lead. Business writers have been saying this for almost as long as artists have been trying to shake up the bourgeoisie. Brian Eno once responded to the latter, saying “those poor bourgeoisie: everyone’s always trying to shake them up; why don’t they give them a little space…” Managers, it seems to me, face a similar dilemma, caught between these repeated exhortations to loosen up and let their people develop their own fully-rounded solutions, on the one hand, and, on the other, ever-present pressures to demonstrate that their commands are as lean and effective as they could possibly be.
We need to recognise that we will never live in a world of completely frictionless communication and totally flat organisations. A big part of the challenge is having the vision to lead people through the many knotty tensions where openness, trust and generosity are most under threat.
At it’s best, Monkeys with Typewriters has an ethical inner voice that reminds me of Charles Handy’s guides to the future of work from a couple of decades ago, The Age of Unreason

and The Empty Raincoat

. Handy was a contemporary of Arie de Geus at both Shell and the London Business School, so perhaps that’s no coincidence.

One thought on “Open, trusting, generous: review of Monkeys With Typewriters, a book on leadership”