One of those happy synchronicities has alerted me to two different ways of presenting information information about population growth. And, to compound the coincidence, the same topic was raised in a discussion with David Puttnam that I attended in the same week as I discovered them.
First is this video, which was featured in the Long Now Foundation blog. The animation of population growth from year 00000 to 02020 (Common Era) runs from 0:45 through to 3:35. The quickening pulse rate is a bit hammy, especially as the visuals alone tell a pretty compelling story (hint: wait until the last few seconds).

A more recent treatment of the same situation, but projecting from 02000 to 02100, and focusing particularly on our biggest cities comes from the site 19.20.21. The basic premise and story here is that there will be 19 cities in the world with 20 million (or more) people in the 21st century. 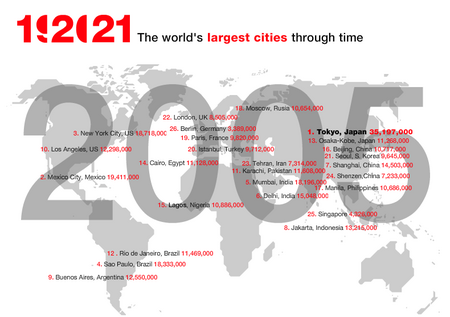 In 01800 just 3% of the world’s population lived in cities. Now the proportion is over half, and expected to exceed two thirds by 02050. The difficulty is that in some respects this is clearly unprecedented in history, but in others we’ve been here before: almost exactly a year ago I quoted Steven Johnson on London in 01854, when the city’s population was 2.5 million, “No city had ever been this big, and many believed that it was too big; that it was unsustainable at its current size and and before long it would have to shrink to one tenth as many people”
19.20.21 takes you through the different dimensions of this metropolitan growth: the relation to water and climate change (most of the 19 cities are next to the ocean), communications networks, the politics of nation states as the mega-cities become quasi states in their own right, and the distribution of wealth.
The site is effectively a trailer for a series of publications and events, inviting corporate subscribers. I wondered who was behind this site and whether they had any corporate or ideological axe to grind. Not yet, appears to be the answer. It traces back to Richard Saul Wurman, from Rhode Island, who has a long and distinguished background in information design.