. In it, he critiqued the impact of the net on democratic discourse and public spaces. His dystopia is one where we all subscribe to the Daily Me, a filter that presents us only with the worldview of people we agree with. What we gain in (temporary) contentedness we lose in critical appraisal and debate — with potentially dire political and social consequences.

I think there are three sets of reasons why Sunstein’s dystopia will not come about:

After my book was reviewed alongside Republic.com 2.0, James Harkin at the ICA invited me to give a response to Professor Sunstein when he was due to speak there last December. Unfortunately Sunstein had to cancel his trip to the UK, and, since he’s published several more books since then, the chances of me delivering my response in person are low. So here it is in writing instead.

When will perfect personalisation arrive?. It’s just round the corner, isn’t it? Well, yes, but it always has been. Back in 01994, The Guardian produced a prototype of its personalised 02004 edition. With all the chaff for ‘other people’ taken out, it was only twelve small pages long. Compare that prototype of what the paper actually looked like in 02004, and you get a sense of how much trust to put in projections of a personalised future.

I’m not saying the scope and application of personalisation technologies and recommender systems won’t extend. But I think Sunstein has allowed himself to be gulled by those who — out of either public-spiritedness (they think these technologies would make the world more efficient) or private interest (they’re selling the technologies) — paint scenarios where personalisation is much more widespread and powerful than it is ever likely to be.

My prediction is that in 20 years time, we will look at personalisation technologies in much the same way that we see the promises made in 01988 for Artificial Intelligence and Expert Systems: as “we’re still waiting” mitigated failures. (Recommender systems share some techniques with AI, and it’s a safe bet that some AI developers of years gone by now badge their work as personalisation and recommendation.)

Do people want perfect filters that feed them only what they like and agree with?. When I do talks about the use of recommender systems to help people discover music they will like, I use this image of what I call the perfect iPod (an idea borrowed from Paul Lamere). 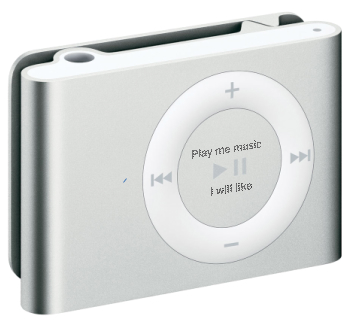 It doesn’t have a screen so obviously it doesn’t do video, but it’s perfect for music nevertheless. It doesn’t need a screen, because it knows better than you do what you want to hear. It has a comprehensive catalogue of all your likes and dislikes. Building on the Nike + iPod technology, it’s connected to sensors in your feet and elsewhere so that it knows whether you’re driving, walking, sitting, at the gym and so on. And its single “Play me music I will like” button senses your mood based on the galvanic skin response when you press the button. Taking all these data sources into consideration, the perfect iPod computes the exact sequence of songs to fit your circumstances, with the right mix of familiar and new music.

This is the Holy Grail that personalised media is supposed to be aiming for, but when I express it like this, most people seem to realise that it is (a) faintly ludicrous and (b) not the kind of music experience they want. They want a more organic and social relationship with music. Sometimes they want to share the same musical experience, whether at a gig or via the radio, even though that comes at the cost of losing personalisation. They’re interested in what their friends are listening to. And, yes, they may have a few ‘gatekeepers’ (critics, DJs, bloggers), who they feel are on the same wavelength as them, and to whom they look for tips and recommendations. But the value of these is not to confirm or echo existing tastes, so much as to help them move on and broaden their musical tastes.

I wouldn’t pretend that process of discovering new music is identical to that of articulating social and political views. But I suspect some of the dynamics may be similar.

One fundamental dynamic is that what motivates blogging, and indeed almost all dialogue, is difference. Occasionally people repeat things that they know their audience already knows and believes, usually as part of some grooming, socialisation or bonding ritual. But mostly we say stuff to other people precisely because we feel we’re not identical to them, and we want to engage with the differences between ourselves. So some blog posts do just repeat what someone else said and add a simple “I agree” endorsement. But they’re not the interesting ones, and the blogosphere would quickly grind to a rather dull halt if it comprised only such ‘dialogue’. What animates blogs are opinions expressed precisely because the blogger suspects that her readers do not share all her views — even if the difference she’s articulating is some hair-splitting between the dogma of the Revolutionary Communist Party (Marxist Leninist) and the Communist Party of Revolutionary Marxists.

To use an electrical metaphor, current only flows when there is a difference in ‘potential’ between two points. Without that, no lights, no heat, no motor of discussion and debate. Cass Sunstein reflects this point himself when discussing the American Constitution: “If everyone agreed, what would people need to talk about?” So widespread adoption of perfect filtering would end up defeating itself: we would be so in tune with the news and opinion media that filtered through to us that there would be no need for those media to say anything any more. And that’s why we’d abandon the filters to make life interesting again.

While Sunstein is a law professor, my professional training is as a psychologist. While he comes from a country with a constitution informed by a clear-eyed vision of democracy, I come from one that has muddled through for much longer with a succession of patched-up, make-do solutions rather than a coherent constitution. The space between these perspectives creates the potential for debate, discussion and argument (and possibly talking past each other!).

The shared ground is that attending to the public space and its function in democracy is clearly important. The net and blogs are having an effect, and we can’t expect this effect to be all positive without any negatives. Stay wary, stay critical. But my hunch is that we don’t need to get too hung up about the Daily Me and perfect information filters.