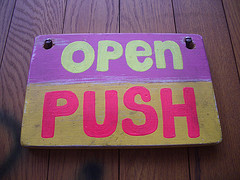 As a small business working in knowledge-intensive, research-driven areas, I’ve got first-hand experience of the frustrations caused by mainstream research publishing: you find a research paper that looks useful, but it costs $30 to read the 15 pages if you haven’t got some kind of institutional subscription. These costs keep going up, and even institutions are having to look critically at what they can afford, in what is known as the serials crisis. Recently George Monbiot stirred up a small storm by drawing attention to this — see one angry reaction, for example.

The Open Access movement in academia has been working for decades to overcome the kinds of problems I experience. As the name suggests, Open Access is committed to all research publications (and sometimes data too) being freely available to anyone for the public good. Momentum has grown in recent years as online tools have made the editorial and distribution functions of publishing much more agile. Nevertheless, there’s still a sense among many Open Access advocates that progress is stalling, or at least not nearly as rapid as it might be.

At the start of the summer I was commissioned, along with Seb Schmoller and Nicky Ferguson, to do a quick piece of work to understand why Open Access was not sweeping all before it. Given the short deadlines, the brief we were given was tightly focused: after a brief literature review, we spoke only to researchers in chemistry and economics.

This constraint was frustrating in one or two senses. Palpably, of course, our literature search was less comprehensive than it would have been had Open Access been the rule rather than the exception. But at least that didn’t prevent me finding Gale Moore’s survey of faculty awareness and attitudes towards Open Access at the University of Toronto. I was struck there by her observations:

While scholars are central, they are only one part of a scholarly communication ecosystem that includes publishers, librarians, university administrators as well as scholarly societies, associations, funding agencies and others. Today, as the economic, social and cultural landscape is being transformed by the turn to the digital that is evident in phrases such as the networked information society or the digital economy, it is timely to ask how does this turn affect scholars and other members of the scholarly communication ecosystem on which so much depends. How aware are scholars of the opportunities and challenges posed by the digital, networked environment in which they are situated, and the implications for their activities and those of others in the system? Are they aware of how the activities of others in the ecosystem affect them? [my emphasis]

“Scholarly communication ecosystem” — there’s that word again. Now here’s the real frustration. Despite this acknowledgement of the wider context of research publication, almost all the research on how to spread Open Access — including Moore’s and our own — seems to focus on researchers and not on the other players in the ecosystem.

To be fair, Nottingham’s Centre for Research Communications, who commissioned our work, have included Pro Vice Chancellors of research and Head Librarians in their own work. They report very little awareness of Open Access and its benefits among these groups. They quote one enlightened Vice Chancellor, who backs up case that the issue has been bottled up as specialist technical concern: “The issue of open access is being narrowly contained as a research issue around publications… We have been a victim of compartmentalisation.” Can you point me to research on the awareness and attitudes towards Open Access among publishers, librarians, university administrators, scholarly societies, associations and funding agencies?

As we wrote in our report, there seems to be a skew in the research on Open Access diffusion towards studying the attitudes and motivations of the “talent” in the research world, rather than the “managers” and middle (wo)men. I wonder if this is just another case of a general purblindness we have to the workings of intermediaries that leaves us unsympathetic and unappreciative of the value they add. Think of the crude musicians-versus-record-labels terms in which music industry crises are habitually framed, ignoring the wider ecosystem of publishers, managers, promoters, radio, reviewers, fan organisations.

One other key insight for me that we tried to draw out in the report is that “the main reason authors and researchers might want to make their work openly accessible — ‘to maximise their research impact’ — is also the main reason they give for having it published in journals that are not openly accessible.” There are all sorts of issues with the metrics for research impact in general and the Research Excellence Framework in particular, some of which the report touches on. However, I think I may have stumbled on one possible explanation of this paradox, through an interview with a Chemistry Professor. What became clear from talking to him was that he had a set of more nuanced ways of building his impact and reputation. It’s not surprising, really: who would imagine that a high-status career could be boiled down to a single measure? Reputation is built in multiple currencies. Some of them have a quick return on investment, others have career-long latencies. Researchers may be able to exchange between currencies, to some degree, and exchange rates vary. This is from the interview:

Speed is the deciding factor for me, especially if it’s something that I want to stake my claim and say that I’m the first one to have thought of this [laughs]. I think for the more traditional stuff I would go to the conventional journals, where I work in a specific area and I’m known there.

And this is how we interpreted it in the report:

Here there is the “pioneer” currency of reputation — the ability to plant one’s stake in new territory for future reference — and another “contributing to the tradition” currency. The former is not expected to have an immediate impact, so doesn’t need to be widely read or cited, but represents an investment with the chance of big rewards if subsequent work shows it to be important — in which case a paper in a “conventional journal” can cite it as a demonstration of prescience and cutting edge work.

If this investment, exchange and accumulation of reputation is what is most important for the research ecosystem — not just for individuals but for the institutions that both back them and trade on their reputations — then having sophisticated and accurate metrics for reputation, with these metrics embedded in incentive frameworks, could be an important lever for change.

Those are just a couple of things that particularly resonated for me. See the full report on Centre for Research Communications page or go direct to the PDF version.