I’m posting here a duplicate of something that first appeared on my Net, Blogs and Rock’n’Roll book blog, just as a reminder to regular readers that, if postings here appear to be thin on the ground, it’s worth checking there as well. What I’d like to do is provide an RSS feed for the two blogs together, but I haven’t yet found an easy way to do that — suggestions from more RSS-savvy people very welcome. (In the meantime though, I do have a Feedburner RSS feed that combines posts here with my Furl bookmarks.) 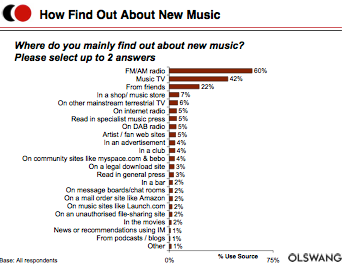 The Digital Music Survey by Entertainment Media Research (and, apparently, Olswang) covers many interesting areas, from MP3 players to DRM to illegal downloading. There’s a 106-page PDF with a rich set of figures available for free download from Entertainment Media Research’s site. I’m going to focus here on a couple of the findings concerning discovery and sharing of music.

The chart on the right shows the different ways in which people find out about new music. I’ve said it before, and I’ll say it again: don’t write off radio (outside the US, at least).

The proportion of people discovering music via community sites like MySpace and Bebo is only 1 in 25.

However, this conceals some differences between age groups. The most visited sites by teennagers are MySpace (56% vs. 35% for all ages), Bebo (50% vs.18%), MSN Spaces (50% vs. 25%) and Piczo (38% vs 9%). The survey then asked all the people who used this kind of site about how it affected their discovery of music. This is where the figures grab attention:

Sharing of music — another important channel for discovery — is also covered. The survey found that two thirds of their sample shared music with their friends, and 15% share ‘a lot of it’. Half do at least one of the following activities to share music: use IM, use email, share hard disks or download illegally.

On the other hand, when buying CDs, three quarters of the group did not sample an album by downloading tracks before buying it. Presumably they either heard it on the radio or TV, or they just took a punt, based on reviews, advertising or previous familiarity with the artist.

The survey sample comprised more than 3,000 respondents in the UK, who were interviewed in July this year. Half of them were under 25, and three quarters under 35. The results include several comparisons with a similar survey last year. Here’s a press release that summarises some of the other findings.

One thought on “UK survey of digital music and discovery”