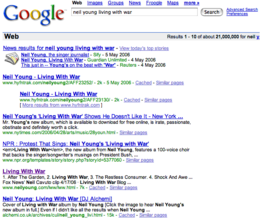 This is my annual round-up of the most commonly accessed pages on this site and the most common search terms that lead people to it. I do it every August, partly because it seems like a slow month, and partly to mark the anniversary of the site. Here are the equivalent charts for the first year and the second.

Here are the charts for this year. They are based just on the last six months, because that’s how far my web logs go back.

The dominance of Neil Young in these charts requires some explanation. This comes down to the apparent vagaries of Google. In the week that Young’s Living With War album was released, my posting about it was in Google’s top six results for the search term “neil young living with war”, outranking Young’s own official blog (click the thumbnail to the right to see a larger version).

My Living With War post is still in the top thirty results at the time of writing, though even back in May the highest it came when searching Google’s blog search with any search term was just outside the top 100. Odd, though I’m sure some Google-heads can explain this.

The top ten posts are, in descending order:

A lot of traffic comes to this site via search (between 75 and 80% or more if Google’s analytics are to be believed). I’d like to increase the proportion that comes from referrals from other sites, since they are more likely to generate what you might call ‘relevant’ traffic.

The perspective that you would have on this site from looking through search engine goggles would be quite misleading. The second chart above is not representative, I think, of what I write most about here. Is that my fault: am I not optimising the site to attract the ‘right’ searches? I’m not sure what I could do. Neil Young, Joe Boyd and Werner Herzog are (collectively) the subject of less than ten of the 360 posts here. I’ve written almost ten posts on playlist sharing alone, but many fewer people search for ‘playlist sharing’ — or perhaps they use several different terms to arrive at these posts, whereas everyone uses ‘Werner Herzog’ to search for posts on Werner Herzog. (Happily a couple of posts on playlist sharing are in the first chart above).