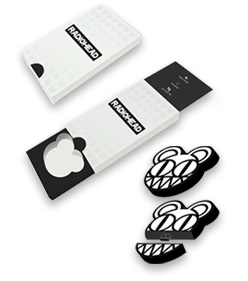 This is the season where many bloggers are providing their predictions for the year ahead. I tend to opt out of these because a year is both too long and too short to foresee many types of change, which are like rainstorms or earthquakes: you know one’s coming, but you don’t know quite when or where until the early warning signs appear. I’m more of a Long Bets man, so today I’m going to revisit something I’ve touched on occasionally in the past, most recently nearly two years ago: the falling price of MP3 players and the possible implications for listening/buying experiences.
In the last year or so there’s been a growing wave of music being distributed on USB sticks — the picture is of Radiohead’s 6-album “boxed set” in its USB version, which, at $160 or £79.99, somehow cost twice as much as the CD version of the same albums. The problem with these products is that, once you’ve copied the data off the stick, the stick is just… a stick. You can keep it on a shelf, back-up your homework or your novel on it, forget about it in the glove compartment or loan it to a friend who forgets it in his glove compartment. It’s a piece of plastic with some data on it.
But add a player to it, and it has a different kind of value. Now you just have to bring your own headphones (or powered speakers) and you’ve got all you need to keep you entertained for as long as six Radiohead albums turn you on (about 15 minutes in my case, but these people may differ).

In February 02006 I was quoting £39.99 for an MP3 player, but now iPromo are offering 1GB MP3 players for £10 if you buy in bulk. Tzomé are offering MP3 players with your band’s music preloaded for the same price. How long before branded versions of these, packed with maybe the latest album plus a recording of tonight’s performance, appear at the merchandise table at gigs? They could cost less than the hooded sweatshirts and still be profitable.
Buy the music and the player comes with it. I think this could be part of a wider building of momentum for tools that exploit the increasingly marginal costs of basic, high-volume technology components. (The OLPC laptop could be seen as another example.)
Quite when this will grow into a full-blown ‘wave’ of products that reach beyond niche markets is hard to predict. Within another 2-3 years? Ultimately, of course, the wave may break when we get photos of landfill sites clogged with disposable gadgets that have been disposed of. Then we’ll all have one government-registered device, ergonomically made to measure each of us individually, but with a usage life measured in decades, which we have to upgrade and maintain. Just joking — though my turntable is 27 years old and sounding just as good as it ever did (cost of ownership around £5 per year); I hope one day to own something equally as long-lived.

7 thoughts on “The Age of the Free MP3 Player”