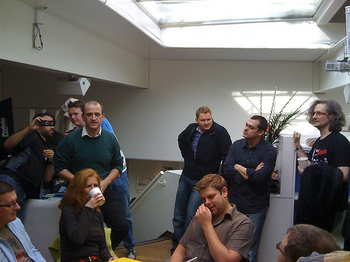 It’s a year since I did a ‘compare and contrast’ blog post about two initiatives to build networking activity. To recap briefly, the RSA is a 254-year-old membership organisation devoted to art, design, business and the environment, currently with around 28,000 ‘fellows’, which launched a Networks initiative on 22 November 02007 (I didn’t go). The Social Media Café (a.k.a. Tuttle Club, named after Harry Tuttle), on the other hand, had its very first meeting on 21 November last year, and I did go. It aims to create spaces where people interested in social media can connect, socially and for business. So far, that has involved a series of weekly café sessions, which are ‘prototypes‘ for something that may be more far-reaching. (The picture on the right shows, Lloyd Davis, Tuttle Club prime mover, making a brief announcement at the first birthday meeting nine days ago.)

One year on, how are they each doing? Where do they converge and diverge?

Let me see if I can build up some dramatic tension here, to make it into a good story. Is the Tuttle Club the 21st century analogue of coffee house meetings that led to the formation of the RSA in 01754? Will the RSA be shown up as a lumbering beast of the 18th century, unable to move quickly or be flexible because of all its baggage, so that the Tuttlers can run rings round it? Or will the Tuttle Club turn out to be a typical Web 2.0 phenomenon, supported by an initial wave of enthusiasm and attention but zero revenue, and at risk from the capricious mood of its freelance participants, who will lose interest when stronger commitments are required of them, or when they (errr, we) finally have to resort to getting proper jobs?

Now let me deflate that tension straight away. In both cases, it’s far too soon to say. And anyway, there’s no competition here. A small number of us happily frequent both spaces, and symbiotic co-evolution would be an ideal outcome for both initiatives. (Yeah, OK, I know: wouldn’t it always?)

So having told you the punchline, here are a few ‘compare and contrast’ notes to record a snapshot of where things are at the end of the first year. This is a subjective, largely impressionistic and annoyingly London-centric account. I haven’t gone back and re-read everything that’s been produced — which in the case of RSA is about 40 times what has been written about Tuttle — though I have recently made my way through most of the NESTA-commissioned evalution of the RSA Networks project. To disclose my interests and affiliations, I am a fellow of the RSA and have no official status with the Tuttle Club (but then neither does anyone much). In terms of participation, in both cases I would say I am on the dividing line between centre and periphery, but leaning towards the periphery, as is my wont.

I told you my conclusion before I started writing these comparisons. The writing turned out longer than I expected: turning these points over hasn’t fundamentally changed how I thing, though I’ve felt both warmth and frustration towards both. One penny that finally dropped was that I’ve made more good friendships with people in, and adjoining, my fields of interest over the past year than at any time since I moved to London — and all are involved in one or other or both of these networks. The enjoyable conversations I’ve had with them have informed almost all of what I’ve written, though I take responsibility for the quirky opinions and any misrepresentations (hoping that friends may correct me).

I hope the next year is as fertile and as much fun. I’ll let you know.