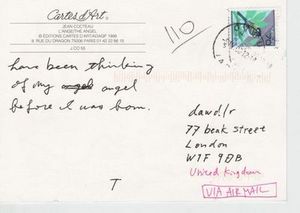 About a month ago, or maybe two, I was on the sofa at London’s Social Media Cafe having a chat to David Wilcox. We had no deals to do, and no pressing initiatives to scheme about, but our interests and contacts overlap at several points, and it was a wide-ranging discussion [Update, 30 November 02008: it turns out Lloyd Davis took a photo of this chat.]. I can’t remember quite how it came up, but we started to talk about our approaches to blogging, and particularly the tacit pressure to provide more or less instant comment on developments in our respective fields.
Having recently written a book about how people discover music and other media online, I’m sure my publishers would love it if I were to raise my profile as a digital pundit, passing on the latest news and maybe adding my angle to it. For example, they asked me to provide a few words on the Radiohead In Rainbows story last October.
But, as I explained to David, that kind of thing doesn’t come naturally to me. I don’t think my first thoughts are necessarily my best thoughts, and often it’s better to let the dust settle a bit before passing opinion. For example, it was probably a few weeks before it became clear that Radiohead had made a mistake by not providing a streaming version of their album for people to try it out. As a consequence, the only way for non-die-hard fans to judge how much it was worth to them was to download it — which they did for free, rather than paying, precisely because they didn’t yet know if it was worth more than that. In hindsight, I could have made a more telling, and controversial suggestion, about the failure of In Rainbows as a discovery case study, just by waiting a bit.
Maybe, said David, we need a Slow Blogging movement. That was a bit of an Aha! moment for me… but I thought I wouldn’t rush into writing about it, and sure enough more useful pointers have emerged since…

I knew that the Slow Blogging idea was too good to be completely original, and, indeed, a quick Google search revealed that many had played with the term before.
But it was another pointer from David — arriving, ironically, via Twitter a few days later — that I found most interesting: Joe Kissell’s lengthy and thoughtful essay on how different people engage with so-called ‘microblogging’ services like Twitter (the ones that encourage you to provide updates many times throughout the day).
I’ve never taken the Myers-Briggs personality test referred to in Kissell’s piece, but I know enough about it and related tests to be fairly certain that I am an ‘introvert’ in its terminology. That terminology isn’t quite the same as common usage: being an ‘introvert’ doesn’t automatically mean that I am shy and retiring, but it does mean that my natural instinct is to orient myself more to trains of thought and feeling as they unfold ‘internally’ than to the flow of ‘external’ events and messages that come at me. There are strengths and weaknesses to this trait (as there are for extroverts), but it backs up the tendency for me to be less likely to shoot from the hip in response to every new announcement, and more likely to chew over a number of developments, try and synthesise them, and then come out, eventually, with some original or considered reflections.
And then a few weeks later I came across another rather wonderful Slow Blogging site (via Russell Davies’ blog) called dawdlr. It uses the tumblr microblogging service, but subverts it, and Twitter, by virtue of its pace. Like Twitter, dawdlr lets you post and share status updates on what you’re doing, but you have to send them by postcard. And, after they’ve been scanned in (see the example dawdlr postcard above), they’ll be put on the website, which is updated… every six months.
The simple implication from this is that you need to think about what you’re doing ‘now’ on a different timeframe. That’s to say, not so much heading to this evening’s meet-up, as composting the relationships, ideas and opportunities that will fertilise next year’s growth.
And when I say ‘I’m blogging’, on a longer timeframe what I mean is that I’m turning over and testing out possible ideas, hoping to sift which are useful to me and to others. Right now I have a list of 27 ideas for blog posts. Over time this list tends to get longer rather than shorter, though at least a third and possibly more than half of those posts will never get written because they’ll be overtaken by events, or written by someone else. (Though in a short while, the list will briefly be down to 26.)
Am I kidding myself about this? Is there value in forgoing the rapid-fire, driven-my-news-agenda for something a little more contemplative, or does that fly in the face of what blogging demands? What examples of big successes from this approach are there?
Any answers, or wider ruminations, welcome — in your own time.
[Update, 30 November 02008: at the start of this month, I was contacted by a reporter from the New York Times, asking me what the term ‘slow blogging’ signified for me. She didn’t use my hastily-written response, and you may agree she was not to do so: “For me ‘slow blogging’ means taking the time to let the pattern of events reveal itself, rather than responding to each happening by shooting from the hip. If you blog about your garden every day, you’ll focus on changes over a short timeframe — usually the last few days — but you may miss getting a full perspective on the change of the seasons. And how will you convey climate change year after year in a way that holds your readers’ attention. How will they see the wood for the trees?”]

2 thoughts on “On Slow Blogging”