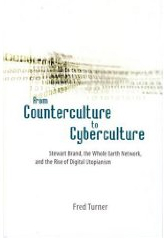 A couple of years ago, at the end of this post on the crossover between Web 2.0 and anarchism, I wrote that I’d started reading Fred Turner’s From Counterculture to Cyberculture: Stewart Brand, the Whole Earth Network and the Rise of Digital Utopianism

, and suggested I might be blogging about some of the ideas in it. Time passed; I soon forgot the ideas the book had triggered; things moved on. Then, when Nico Macdonald told me the book was up for discussion at his Innovation Reading Circle, that gave me a reason to re-engage with the book. Nico already had Joanne Jacobs lined up to give an introduction to the book, but kindly created a support slot for me to give a response to Joanne’s critique. What follows is that response, plus some brief and partial notes of the discussion that followed at the Reading Circle last night.

It makes sense to read Joanne’s review in full first. To try and summarise it in a nutshell, Joanne is saying that Turner’s radically overstates the countercultural significance of Stewart Brand and his circle of tech-visionary associates — much of their work and ideas actually has more in common with the dominant culture than with anything genuinely subversive. And to summarise my response in a nutshell, I ask, “So what if they weren’t and aren’t revolutionaries? Does it take anything away from their importance?” Then I try and answer the So What question in my own way. That’s enough prefacing; on with the show.

I’m not convinced that Fred Turner is making any claims for Brand and his associates as revolutionaries. The book is called “from Counterculture to Cyberculture” and its main narrative is one of how a bunch of ideas from the fringes of society became mainstream — through the agency or the catalyst of Brand and his eco-filofax of contacts. It’s the same narrative of innovation — corporate enterprises being prepared to think out of the box to be creative and competitive — that has become orthodoxy in many circles not too far from here.

This idea of boundary objects that “both inhabit several intersecting social worlds and satisfy the informational requirements of each” has been around for a while, and I think Turner’s application to Brand’s story is at least plausible.

What’s remarkable about this story (and Brand’s thinking) is the way he combines things that we usually think of as ‘counter’ to each other:

1.2 Who cares whether it’s counter or not, if it works and it’s good?

Does Stewart Brand position himself as a subversive, a guru or a counterculture figure? With one proviso that I’ll come to in a moment, I don’t think he does. His own self-description is as a journalist, a small business entrepreneur and, through the Global Business Network, a consultant. (In this combination of roles, he probably has a lot in common with many in the Innovation Reading Circle.)

The proviso is that he may have traded on his colourful experiences and friendships with counterculture figures when promoting his ideas and marketing his business. Paradoxically this kind of ‘wacky creative’ profile plays very well in some corners of ‘straight corporate’ culture, especially if you’re selling scenario planning (it helps the straights feel better about themselves; they feel more rounded and less straight for hanging out with the creatives). Turner is also complicit in this presentation of the Brand persona, because it makes his book more interesting if his central character is colourful and creative.

So, as a journalist and a businessman, my feeling is that Brand is more interested in being close to the action and being competitive through innovation than any wider political purpose. If we’re trying to pin down where he’s coming from culturally and politically, I think the best clue is from his non-profit venture, the Long Now Foundation, an incubator for projects that, in Brand’s words, seek to “hack civilisation” to encourage more long-term thinking. Have a look at his TED talk on one of these projects, the Clock of Long Now, where Brand describes the exploration of a remote Nevadan mountain and the experiences that his mates like Jeff Bezos had there. When I watch it, I can’t help being reminded of the opening section of Keroac’s Dharma Bums, a bunch of guys finding themselves in the wilds of nature, bonding and blending with the oneness of the cosmos. Brand is the WASP kid who, via hanging out with Ken Kesey and dropping acid in 1962 (at a cost, according to Turner, page 61, of $500, which would have bought you a luxury car back then) got swept up in a lifelong search for Beatnik satori. This “all encompassing now” as Turner describes it (page 67) was surely a forerunner of the Long Now.

Counterculturalist or not, Stewart Brand has been associated, mostly indirectly, with several of the innovations that we count as cornerstones of our 21st century creative, innovative, digital environment. [In the discussion — see Section 5 below — we asked to what degree Brand & friends had been agents, catalysts, vessels or just nearby bystanders in relation to the developments mentioned in the book. The non-committal conclusion was probably a bit of all of these. With the exception of the WELL, this list is of developments not connected to Brand but reflecting his approach or influence.]

I’m not sure quite where Brand stands on power and influence, and what I think of what he says about it. Given his championing of long term thinking, he seems to have little sensitivity to the history of power and vested interests — the tendency of those interests to protect their own, whatever the cost — despite having interesting things to say about the application of history. Perhaps because he has himself had no difficulty hacking into the corridors of power, he seems blind to the difficulties that others might have. There’s a quote of his that I’m sure I read years ago, but have failed to find again, which went something like, “Our society suffers not from too many elites but from too few. If you don’t like the existing elites, create your own” as though that were the route to a healthier, participative democracy. Sure, easy, let’s create our own elite. Let’s invite Jeff Bezos, Mitch Kapor, Brian Eno, Al Gore and (we-need-a-woman-who-can-we-ask?) Esther Dyson to join it — I’m sure they’ll say yes.

Mitch Kapor, whose money helped buy the mountain to house the Clock of the Long Now, has a telling quote that might be a rebuff to that notion, “Inside every working anarchy, there’s an Old Boy Network“. Or, more likely, they’re on the same page, for Turner quotes Brand, “Nepotism works so long as the whole system isn’t corrupt” (page 189).

As I say, I’m not quite sure what’s going on here, or what I make of it — around this point in the book, Turner mentions the influence of G.I. Gurdjieff, and whenever Gurdjieff’s name is mentioned I find a kind of Kate Bush/Robert Fripp fog descends… [In discussion at the Innovation Reading Circle, Chris Dymond mentioned Edge, a kind of non-profit sibling of the Global Business Network, with overlapping membership, as an explicit attempt to bring together what Gurdjieff called “remarkable” people, to form an influential elite.] Whatever, it’s hard to disagree with Joanne’s case that this is no counterculture worthy of the name!

4 Concluding, with a twist

Is there an overarching narrative in these cyberculture values? I think there is: an eco-cyber (GM & nuclear) Enlightenment narrative. Brand is swimming in the same water as people like Ray Kurzweil with his Singularity Theory. When he contemplates our post-human future, it’s not a cyberpunk dystopia that he sees, but rather a world where we are, literally, “as gods”. When Brand talks of whole systems, he really sees us — humans — as being able to stand outside our ecosystem and manipulate it like an engineering problem: a bit of nuclear energy here, GM crops in the developing world, and geoengineering in the oceans to keep climate change in check.

I don’t buy this. To be fair to Fred Turner, he is occasionally sceptical of our “godlike ability to see the world from above” (page 92) and notes Brand’s association with Herman Kahn, quoting the latter: “We take God’s view. The President’s view. Big. Aerial. Global. Galactic. Ethereal. Spatial. Overall. Megalomania is the standard occupational hazard.” (page 186). Not to mention hubris and lack of awareness of your own blindspots. Turner notes wryly that Kahn is mainly remembered today as the model for Stanley Kubrick’s Dr Strangelove.

I think there’s a lesson from Turner’s account that he seems to have missed, perhaps because he’s too close to it, or because we find it difficult to step outside our present moment and its taken-for-granted ‘truths’. Turner doesn’t say so explicitly, but seems to believe that Brand has somehow stumbled on a kind of universal recipe for innovation: identify some divergent disciplines, step outside them to see the ‘whole system’ and then facilitate their open convergence through boundary objects and network forums. Sound familiar? Hello, NESTA!

But I think the lesson from the book is that this recipe is not universal but contingent. Contingent on a set of circumstances that applied in the second half of the 20th century — with the end of the Second World War, the nuclear age, the semiconductor and the rise of the information processing/computational metaphor — and maybe the first part of this one. But there are other ways to innovate as well, and some of them are not open, collaborative, co-designed etc (ask Steve Jobs). [The rest of this section is a rehash of an earlier post.] I was influenced at an impressionable age by the anti-method “anything goes” philosophy of science of the late Paul Feyerabend. Arguing against the likes of Karl Popper’s falsificationist account of scientific progress or Thomas Kuhn’s model of paradigm shifts, Feyerabend writes,

My intention is not to replace one set of general rules by another such set: my intention is, rather, to convince the reader that all methodologies, even the most obvious ones, have their limits.
Anything goes… is the only way in which those firmly committed to universal standards and wishing to understand history in their terms can describe my account of traditions and research practices… If this account is correct then all a rationalist can say about science (and about any other interesting activity) is: anything goes.

There are no universals, including Anything goes. How many of our most radical, insightful thinkers are in danger of being not amplified but dulled by social media? This mass visibility of trends and memes may be working subliminally to nudge our ideas so that they go with the grain of contemporary orthodoxy rather than against it. Maybe we need less connected people who can go against the grain without worrying about peer opprobrium.

5 Postscript, from the discussion at the Innovation Reading Circle

We had a very enjoyable two hours of discussing From Counterculture to Cyberculture, during which Joanne and I summarised our points informally. As well as Joanne and me, and Nico as chair, Kathryn Corrick, Becky Hogge, Gordon Joly, Chris Dymond, Louisa Adam and Andrew (didn’t register on the Facebook event page, so I don’t have surname!) took part. I find it enough of a challenge to listen well and speak at the right moment, so note-taking had to take a back seat, and what follows is very partial indeed.